A New Era: From EADLs to Alexa!

A New Era: From EADLs to Alexa!

What We Will Be Covering

This is an area that I have been teaching about my entire career. This came on my radar in my first year as an occupational therapist, but at that time, the technology that was available to us was very primitive. We have come such a long way since then. There is tremendous crossover now between this area of technology and consumer electronics, and that is what we are going to cover today. Please keep in mind this is rapidly changing, and a lot of the onus is still on us to make sure we are aware of the most available options.

What are EADLs? This is an area of assistive technology known as Electronic Aids to Daily Living and has been known by other names as well such as environmental control units. These provide an alternative means of controlling devices, usually at home like audiovisual equipment, the TV, cable box, music, lighting, thermostats, et cetera. Advances in consumer home automation have opened up control not only for the general population where we are controlling devices in a much different way, but it is also creating many opportunities for those with disabilities.

Many people with disabilities have difficulty controlling devices in the environment due to physical, visual, and/or cognitive limitations
This control is important for independence, safety, and overall quality of life
Early ECU systems became available in the 1980s
The name later became EADLs
This area of assistive technology was chronically underfunded and behind the level of consumer technology advancement

People who have disabilities have difficulty controlling things in the environment due to physical, visual, and cognitive limitations. For example, it might be difficult for someone to turn on their television and switch channels. They may not have the motor ability to reach out, grab the remote, and push a button. Or, they may not be able to see what is on the remote. They may not be able to remember a specific sequence of commands. For people with disabilities, this control becomes very important and it is not simply a convenience. Being able to control the environment increases a person's independence, safety, and overall quality of life.

Environmental Control Units  (ECU) became available in about the 1980s. Consumer technologies were not very advanced during this time. In fact, this is when VCRs and CDs were just coming out. The name later changed to Electronic Aids to Daily Living (EADSs) to better define this area of technology and to improve funding. The challenge was, regardless of the name, that this area was chronically underfunded and constantly behind consumer technology advancement. It was also often overpriced.

This area of assistive technology tends to fall into two main categories: Basic EADLs and multi Function EADLs. Basic EADLs are not used as much as they used to be due to advances in technology, but they still have a place for the clients we work with, particularly with children and with adults who have significant cognitive limitations. Basic EADLs provide simple switch control of battery-operated devices or simple electrical devices. For example, a stuffed cow that we see here in Figure 1 can be set up with a switch for a child to operate. 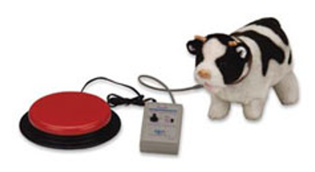 Other examples are single on/off appliances like a light or a fan. This area of technology includes devices such as Switch Latch and Timers (SLAT--shown with the cow toy). This is made from AbleNet that allows switch control of a simple electrical device.

Then, we have multi-function EADLs and these provide full control of a variety of devices and functions within the home (Figure 2).

Instead of just operating one item, we now have control of an audiovisual system as an example. These devices allow you to not only turn the power on and off, but it also allows the changing of channels, the operation of the DVD player, and so on.

While there are still some of these devices out there, many are overpriced and often there is no funding. There are times when these are appropriate and we will review them. The other difference between multi-function EADLs versus our basic EADLs is that these devices can be accessed directly by pushing a button (if the client has the ability), by a switch, or by voice.

There has been an increasing overlap over the years between home automation devices and even robotics in the EADL realm and much of this technology is now being replaced by consumer technologies such as Alexa as seen in Figure 3.

Electronic aids to daily living provide alternative control devices in the environment. This can include an electric hospital bed, nurse call, door openers, telephones, lights, very simple appliances like a fan, and heating and air-conditioning systems. We now have the ability to control a more significant number of devices as well as functions for each of those devices. These systems typically use infrared. Infrared is what a typical television remote uses to send signals.

A technology called Insteon can be used to control things that plug into the wall by using the wiring within your house. Insteon Technologies has, for the most part, replaced technology called X10. Some of these systems use other wired transmission options as well. One example is the PocketMate by SAJE Technology in Figure 4. 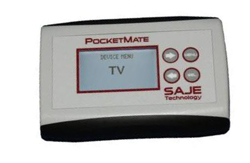 Access, again, is by direct contact, switch, or by voice, and these systems are usually too complex for young children or people who have cognitive disabilities. Additionally, these systems often require good vision and good literacy which can be a limitation for some of our clients. 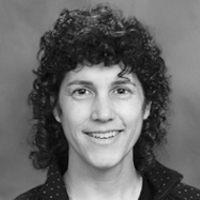 Michelle is an occupational therapist with over 30 years of experience and has been in private practice, Access to Independence, for over 15 years. She is a well-respected lecturer, both nationally and internationally and has authored numerous texts, chapters, and articles. She is the co-editor of Seating and Wheeled Mobility: a clinical resource guide, editor of Fundamentals in Assistive Technology, 4th ed., NRRTS Continuing Education Curriculum Coordinator and Clinical Editor of NRRTS Directions magazine. Michelle is a RESNA Fellow and member of the Clinician Task Force. Michelle is a certified ATP, certified SMS, and is a Senior Disability Analyst of the ABDA.

1 https://www.physicaltherapy.com/pt-ceus/course/matching-products-to-seating-needs-4099 Matching Products to Seating Needs Once the wheelchair seating assessment has been completed and seating interventions considered, it is time to match specific client needs to product interventions. This course presents various categories of seating systems. Seating systems, whether linear, contoured, or molded, are comprised of primary support surfaces, secondary support components, and materials. This course is directly related to the practice of physical therapy and is therefore appropriate for the PT/PTA. auditory, textual, visual